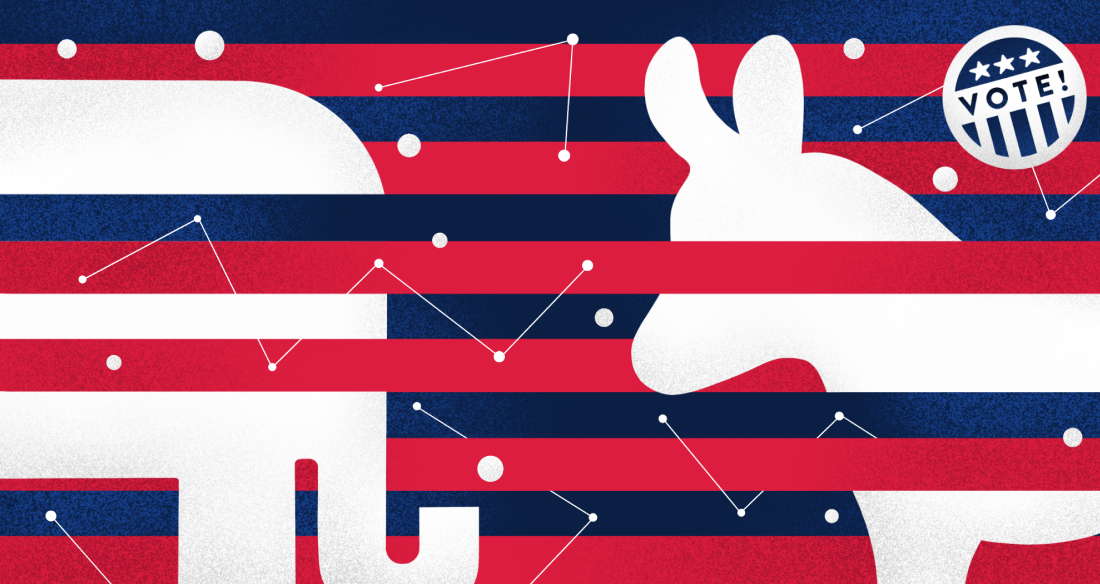 The 2020 US Presidential election is the most-watched political election of our time, and $3.7 billion has been deployed towards winning the hearts and minds of American voters — higher than all previous Presidential ad spending.

With over $264 million spent in the third quarter on Facebook alone (roughly 3% of Facebook’s estimated total U.S. revenue in the third quarter), we wanted to understand how Trump and Biden are portraying themselves through their ads and what their creative decisions say about their overall campaign strategy.

To do this, we analyzed 500+ unique image and video ads (we excluded ads that were similar, e.g. same creative but targeted to a different state with slightly different copy) from each candidate’s official Facebook accounts between August 1st and October 10th (1,000+ ads total) that were gathered using Facebook’s Ads Library. We looked for two things:

Here are our top 15 insights from a detailed visual analysis of 1,000 political ads:

Given Donald Trump’s larger-than-life persona, we hypothesized his campaign would feature him in nearly all ads. However, Trump was only visibly present in just over half (50.5%) of all ads analyzed, which was the approximately the same frequency with which the Biden-Harris campaign featured Biden (52.7%).

Biden is far more likely to feature Kamala Harris in his ads and portray his campaign as a partnership, featuring Kamala (13.58%) about 3x more than Trump features Pence (4.39%).

Trump’s ads feature Kamala Harris (8.58%) nearly twice as much as they feature Mike Pence, and nearly 11x more than Biden’s focus on Pence (0.79%).

We broke diversity down into three parts, measuring the occurrence of non-English language, non-white people, and females that weren’t Kamala Harris. (See table 2.)

With 32 million eligible voters, Latinos are the largest racial minority for the first time this election. Biden’s ads (10.71%) are nearly 11 times as likely to use a Spanish narrator than Trump’s ads (1%), whose content seems to be, if language is any indication, ignoring potential LatinX voters.

While women make up 50% of the US population and, since 1984, have outnumbered men in the voting booth, just 35% of ads from both campaigns feature females (ads that only featured Kamala Harris were excluded from this count). In 2016, 63% of eligible women voted, versus 59% of men.

8: The women featured by Trump are often family members.

Brookings has declared this election the Year of the Women Voter. However, females who feature in a Trump ad were disproportionately likely to be a family member or a member of the DNC attacked by Trump, such as Hillary Clinton, Nancy Pelosi, and AOC.

9: Trump leans on his fan base

President Trump’s campaign is eager to showcase his support base, and creatives featuring the President surrounded by crowds were used twice as frequently by his team relative to Biden’s (20.36% vs 9.52%, respectively). Biden was more likely to be shown surrounded by small groups or with 1–2 other individuals.

People in uniform (whether military, army, or police) feature more prominently in Trump’s ads and represented 7% of all ad content (as compared to 3.5% for Biden).

11: Neither candidate is talking about COVID-19.

Given the fact that over 220,000 Americans have died from the coronavirus, we hypothesized this topic would play a major role in both candidates’ advertisements. Trump mentioned Coronavirus in 2.79% of his ads, but Biden was only slightly ahead, with Covid-related terms explicitly mentioned in only 4.96% of ads evaluated.

‍12: Trump’s ads feature masks when they include Biden.

Promising to listen to the science, Biden is seen wearing a mask in 13.69% of his ads, compared to the 4.19% of masks that feature in Trump’s ads. In fact, 76% of Trump’s ads featuring masks were creatives that featured Biden.

Trump’s campaign was 3x more likely to speak to jobs and employment than Biden. This was surprising given the rise of unemployment and something that we hypothesized would be more ubiquitously present across both campaigns.

15: Donations are more important than votes.

We hypothesized that getting people to vote would be the primary Call To Action (CTA) used by both campaigns. However, both Biden and Trump asked people for donations more frequently than votes: 20% and 18% respectively called on audiences to donate vs 14% and 11% called on people to vote.

In conclusion, many of the hypotheses we had were proven wrong when analyzing both campaigns’ creatives more objectively. Trump’s campaign team went on the offensive: frequently attacking his opponent and featuring negative-leaning messages, such as positioning the Black Lives Matter movement as a cause for civil unrest. Biden’s overall campaign strategy leaned on his strengths more than it did on the weakness of his opponent, but it missed the opportunity to speak to jobs (Trump’s campaign mentioned this 3x more frequently), which is surprising given the current state of the US economy and unemployment. While the candidates’ Facebook ads are just one part of their overall campaign strategy, it is likely that a significant percentage of the voting-age population would have been exposed to this content prior to casting their ballot. Only time will tell how it impacted their vote.